Saturday 6am THE FINALE – Amazing Race

I only finalised this Challenge last night but I was happy with what I came up with.

All through the night it rained and I thought, bring it on! I sort of hoped the weather would be ok when everyone arrived but then if it rained while we were out running so be it!

I woke up a little late which didn’t leave long to get the 20 Oxygen drink bottles out around Kiama. But I got them done in the end. Just! Each bottle contained a “clue” inside for each Team which would lead them to their next destination. At each stop Challengers had to punch 100 punches, swap over and same for their partner.

I figured the GREENs and BLUEs being in 1st and 2nd place, could go the slightly harder way and the REDs and YELLOWs could take a slightly easier route. In the end it didn’t matter as Kiama Council workers had gotten word of an amazing race challenge and set about finding the clues whilst cleaning up the rubbish around town. So a few Oxygen bottles went missing but the coke bottles, chip packets and other rubbish remained. 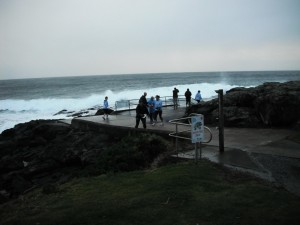 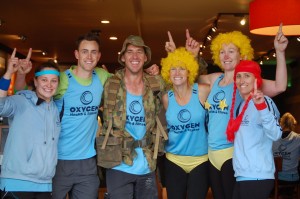 I had to run back and forth between the four teams telling them the clues and even though half the race was cut out, it kind of added to the whole mystery of it all and was pretty funny.

The Reds and Yellows ran out of clues at Kiama Cycle Shop and started to run back to Hindmarsh Park. When they saw the GREENs AND BLUEs they sprinted home for an equal 1st finish. Little did they know we had half the race still to go. But of course our clues were missing at Kiama Cycle Shop and a GREEN BLUE sprint finish was on. 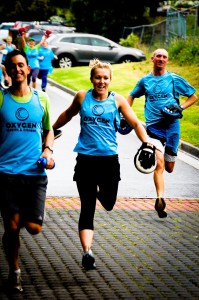 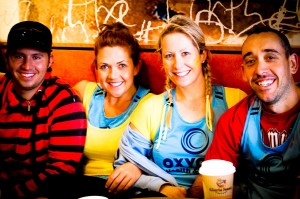 The Amazing Race was a fun little mystery in the end but what was more amazing was the work ethic of Kiama Council staff on a rainy windy Saturday morning. I bet they were sitting there laughing about the mad “Crew in Blue” who were running around town with no idea where to go!

Everyone congregated over to Gloria Jeans for a nice warm coffee and rest after a looong week.

So what are the final scores? Who won? All was revealed at the Party that night.

What a great night! It was held at Waves at the Beach Restaurant and we indulged in a two course feast and a few drinks. This was to celebrate not only the end of Challenge Week but also our 1st year in business. There was a slideshow running throughout the night showing a picture history of Oxygen over the last 12 months, what great times we’ve had and how far we’ve come.

Throughout the night, I announced several awards starting with the question on everyone’s lips, who won Challenge Week? So it was revealed, FINAL point score after Oxygen Challenge Week was as follows: 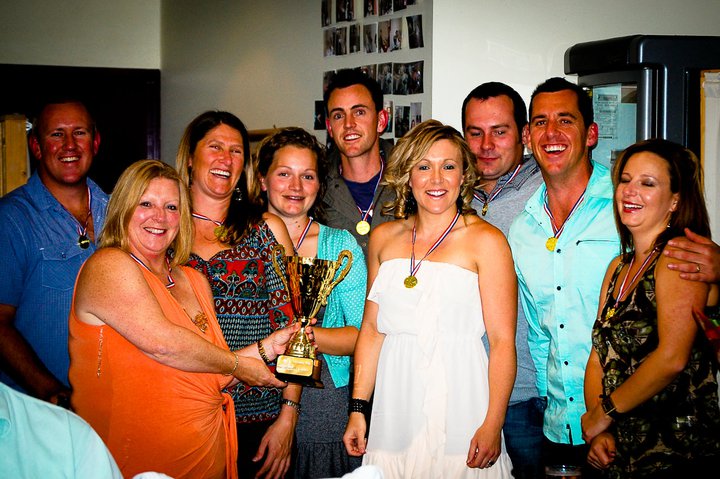 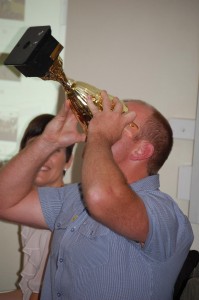 Through receipts we were also able to determine that $2000 was poured into the local economy all in the search for Bonus Points during Oxygen Challenge Week. The BLUE Team just pipped the YELLOWs with a spend of $534 during the week. A fantastic week of fun, fitness and friendships! Great work to everyone involved.

There were also individual awards announced including:

So Oxygen Challenge Week was wrapped up but we still had the all important Member of the Year Awards. In case you’re wondering how we determine this, remember how you guys “sign on” to the clipboard to mark attendance at class? Well we have not only done this at EVERY group session for the last year, but the Trainers have also teamed up afterwards to determine “Performance Points” for those we feel have worked hard, encouraged others and just generally bring a good vibe to class.

Well us Trainers got together one Friday night with a big whiteboard and some markers and started tallying. We came up with our Top 40 pointscorers and revealed them at the Awards night. After a tense countdown, the Bronze medal was awarded to Judy Franklin, Silver medal to Kylie Starling and the Gold Medal with a runaway victory was Renee Miller. Congratulations ladies you are inspirational! 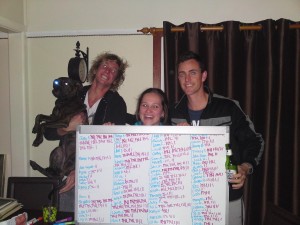 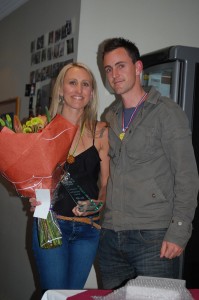 Some other major awards announced on the night were:

So finally this 6 part Blog Post Series comes to an end. I hope you have enjoyed reliving the awesome event that was “Oxygen Challenge Week” and bring on the next one in April 2011! Thank you to everyone who has helped Oxygen get to where we are today and I can’t wait to see you all at our 2nd birthday next year!