I’m always a little suspicious of anything that gets touted as a ‘superfood’. Which is why it took me a while to get around to trying quinoa. 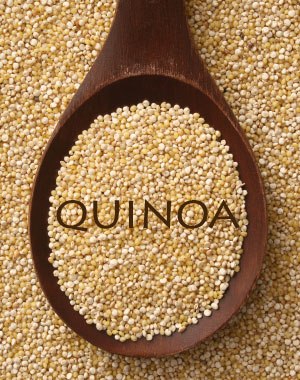 Well, some consider it a grain and some don’t.  Either way, it’s definitely in the grain/rice/cereal family, and that’s a family me  – enjoy eating.

How about you?  Of course you do, most people do!

Even better news is that quinoa is the only grain that contains complete protein, each gram containing all 26 amino acids.

10 things you should know about quinoa

1.         it’s delicious
No matter how ‘good for you’ a food is, most people still want it to pass the taste test. Slightly nutty and grainy, they’re something I could keep eating and eating.

3.         it’s high in protein when compared to most grains, packing in 8 grams per cup.
A big positive for vegetarians as I’ve learned recently. It’s also pretty good on iron and fibre, which gets the nutritionists excited. Even better news is that quinoa (pronounced Keen-Wah) is actually a pretty good source of protein Plus it’s extremely low glycemic coming in at an extraordinarily low 35 on the scale while offering a generous 5 grams of fibre per cup.

4.         it’s gluten free
I’ve got a number of friends who have gluten intolerance and can’t eat most grains.  Quinoa is perfect for them.

5.         it needs washing before use
I read somewhere that the surface of quinoa contains a chemical called saponin that has a bitter soapy taste. Most commercial quinoa will already be washed and have the saponin removed but it’s a good idea to rinse it just before you use it in case there are residues.

7.         it comes in different forms
Just like corn, it can be puffed or rolled into flakes or you can buy it whole.

You can mix it with beans, you can eat it by itself, you can mix it in to “salads”, serve it alongside steak, chicken, or fish…you can pretty much do whatever you want with it anytime you need a quality, low glycemic, high fiber, protein-packed carb source.

9.         it has an interesting texture
The thing I love about quinoa is it’s texture. Something a little like barley with its chewiness, it also has a light fluffiness like prepared couscous.

10.       it’s becoming more readily available
In Australia it’s even available in the ‘health food’ section of our supermarkets. Am sure any health food store worth its lentils would either already stock quinoa or be able to source it for you. 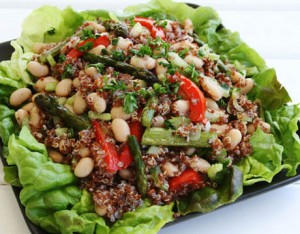