Time for another Monday Motivator to not just start your week but explode into it with energy and enthusiasm.

Over the past few days I’ve had a number of incredible experiences that I’ve now been able to reflect back on. I HAVE tell you about it because I’m excited about not just what I’ve learnt but also what YOU can take out of it.

Today’s lessons can change your life! That might sound like hype to you but you’re obviously still reading so that tells me you at least have some faith in the information I pump out each week.

So what are these life changing lessons?

I’ve just finished up at a BIG annual event in the fitness industry called NPE Mega Training. It started in 2009 and it’s become the world’s number one event for fitness business leaders. In the 5 years it’s been going there’s me and one other guy (and his wife) that have gone to every event. Each year I learn something new and strengthen relationships with some of the brightest minds in the industry. There’s been superstars that have come into this community, set the world on fire and burnt out before they ever really got going. They never reached the heights that I and many others thought they were destined for.

There’s a number of reasons why they’re no longer around but one reasonI know for sure was there was a disconnect with the community.

That one guy I mentioned earlier (his name’s Laurie) was someone that inspired me when I saw him present his case for NPE Member of the Year in 2009. At that time Oxygen hadn’t even started. He had built a very successful fitness business over in WA and I thought wow, here’s a guy who’s only a few years older than me and he’s done it, why not me? I set myself the goal and publicly stated that the very next year I’d be back to present on stage as a Finalist for Member of the Year. Remember, Oxygen hadn’t even begun and the NPE community is full of the industry’s best movers and shakers (my Coach Ric uses that term all the time).

11 months later I was up on stage and I won the Member of the Year Award – you can read about it here. I remember Laurie telling me I got his vote and he loved my story. It was quite a thrill to have a bloke who inspired me telling me he loved my story! Since then we’ve become good mates and we continue to learn from each other.

Lesson 1 – Surround yourself with a community of like minded people, share and celebrate each other’s successes and never stop learning.

I love the member of the Year Awards. Every year they give me a tingle as I listen to the trials and tribulations of people who have risen up against the odds, worked their a$$es off and created something special.

This year’s winners, Suburban Bootcamps in Brisbane, were sitting right next to me on my table. Of all the members at NPE, they run the most similar business to Oxygen. They got my vote and I couldn’t be happier for them. The owners Trent and Sarah are a great couple and they’ve created a top community of hard working, fun loving people. What did I learn from them? Tons including some community building methods, database management and social media tips but if nothing else the quote:

“Feel the fear and tell that b!tch you want to party.”

Not one person in the room has done it easy. In fact some people have overcome some serious challenges that would cause 90% of people to quit. They’ve faced their fears and continue to do so on a regular basis.

Member of the Year 2011 Selina Wright overcame years of mediocre success in her Mackay based PT Studio before she finally reached out for help, took action on the advice, overcome chronic fatigue and created Mackay’s number 1 fitness business. She’s crushing it now doing some big numbers and I couldn’t be happier for her and her man Russell – great people!

Member of the Year 2012 Melinda is blind in one eye and has a condition that will deteriorate over time. Shewas told to start preparing for a job and a life that was second best. She and her husband Andrew worked their butts off to create a business that allows them flexibility and freedom to whatever they want. That includes 24 hour moutain bike races. (Don’t forget she only has one eye.)

Even our mentor Sean Greeley, once voted in the Top 10 Personal Trainers in America has an incredible story. He owns NPE but it has not been an easy ride and he continues to face his fears on a regular basis. He inspires me and every other NPE Member from over 93 countries around the world, it’s incredible stuff. Check out his story here and be sure to watch the video at the bottom.

For me, Mega Training started Thursday but I received a call on Tuesday afternoon that a speaker had dropped out and they wanted me to present on how to run our infamous Challenge Weeks. There’s NPE Members around the world that tune in on Facebook every time we run Challenge Week and want to know how to make it work? So they asked me if I’d run a seminar on how its done.

But I showed them how to run a Challenge Week event and the feedback was brilliant. Here’s the Saddleback Smash Video that I showed them to finish off:

I was  lucky enought to listen in on a great seminar from an Australian sporting champion – former Australian Netball Captain Liz Ellis.  Throughout her adult life Liz has enjoyed enjoyed great success from setting very clear goals, planning things out methodically and committing to the process of hard work by following her passion.

Her passion from a young age was Netball. She wasn’t actually that good at it but she was passionate and hard working. Via a schaolarship at the AIS she got her crack but it was almost three years of being in the Australian Squad before she got her first game.

Throughout her Netball career Liz became one of the highest paid Netballers in Australia – a whopping $8000 a year! That’s eight, not eighty.

Knowing $8000 per year wasn’t going to pay the bills she set out and became a qualified Lawyer but after only a short time she hated her work and knew it was not what she was passionate about. To cut a long story short, she started a successful business running netball coaching clinics. Liz now knows how many kids she needs to not only turn a good profit but importantly spend personal time and eye contact with each and every young girl at her clinic so they fall in love with her even more.

The final speaker of the entire weekend was a guy called Billy Beck who has twice been voted World’s Best Personal Trainer and has personally prepared Dwayne “The Rock” Johnson for a number of Movie Roles. Billy’s theme was about How to achieve the Breakthrough Formula for Success. Live like a Lion, not a lamb. 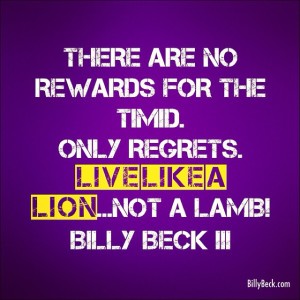 What does that mean?

Most people in life never achieve the level of success they want because they fit into one of two categories:

2) Like a sheep because they’ve grown up a lamb, lived a life in fear and are happy to see out the rest of their days being herded around by others and told how to live their life just like everyone else.

Those who are successful in life are Lions.

They’re risk takers, they regularly leave their comfort zone, they embrace the fear and live courageously. They make mistakes but they learn from them to grow stronger and do it better next time. That’s personal growth and that’s what we should all aspire to. EVERYONE has goals and if you don’t you’re either not being honest or you’re living in fear.

I’m certainly not the pinnacle of success myself but I’m courageous enough to keep trying. Surrounding myself in the NPE community is my best chance of getting where I want to go. I’m kept accountable, I learn from the best and there’s a mutual level of respect amongst my peers that keeps me motivated and hungry.

If you need help with your health & fitness my community at Oxygen Health & Fitness is your best chance of success for all the reasons outlined above. When you join us you’re joining in part a worldwide community of driven fitness professionals who want to see you succeed. Results Guaranteed. Click here to get started.

Lesson 4 – Personal Responsibility. Take active responsiibility for your success, because noone else can do it for you. (NPE Success Priniciple #1).