Welcome to the last edition of the Fitchicks Insider VIP Newsletter for 2013.

This week I’ve got a special FitChicks Year in Review post for you where we are take a look at:

The TOP 5 FITCHICK HIGHLIGHTS for 2013

First though, a little advice for the end of the year.

This time of year is a great time to reflect on the past year and look back on all you have achieved, it is also a great time to take stock and rethink your goals and aspirations for the coming year ahead.

Over the Xmas holidays I want you to rest, relax and enjoy yourself but also take some time to do some goal setting for 2014. Goal setting needn’t be an arduous process or restricted to just fitness. It can be an enjoyable exercise to look at different areas of your life that you want to change in the coming year.

So take some time out, grab a cup of tea or a glass of wine and get a pen and paper. Divide the page into the following headings (this list is not exhaustive, make up your own headings that apply to you) and under each one list your goals:

Family: Example of a goal: Spend more time together as a family

Relationships: Example of a goal: Spend more quality time with my partner

Financial: Example of a goal: Get rid of credit card debt

Personal: Example of a goal: Learn to speak French

Health: Example of a goal: Lower my cholesterol

You may have more than one goal under each heading or only one, it doesn’t matter as long as its personal to you. Once you have set your goal think of the steps you need to take to achieve it and put a time limit on it.

Step 4 – Attend course and do the required study and homework

Family – Spend more time together as a family

Continue listing the steps you need to take to achieve under each goal.

Good Luck and see you motivated and inspired to take on new challenges in 2014!

1. Hardest exercise to master – the dreaded chin up

For females the chin up is one of the hardest exercises to master. All of our Fitchicks have improved out of sight with this exercise. Even Leanne Williams and Tammy Langlois had to use a band for assistance back when they started Fitchicks in February 2013 and now they bang out 18 with a weight attached. Even if you haven’t achieved that illusive unassisted chin up, think back to how much assistance you needed at the start of your Fitchick journey and be proud of what you have achieved.

Squats and deadlifts are the best exercises for achieving a toned strong beautiful body and as such they featured frequently in our Fitchicks programs in 2013. I would like to remind you of the sort of weights you were squatting and deadlifting when you first joined fitchicks. Compare these to what you can do now and be proud.

3. A Picture is worth a thousand words

We talk about best transformations of the year and like most females you probably look at other FitChicks and can see the change in them but are unaware of the changes in yourself. I want you to find a photo of yourself from this time last year and take a good look.

You may not have had massive weight loss in the past year but I bet you will see changes. There will be improved tone in your arms, back and legs for a start.

Reflect on what you have achieved and enjoy how good you look. You deserve to feel good about yourself, you have worked for it.

Lets face it girls, you dominated your teams in Challenge Week. The top performers both men and women were FitChicks and Spartans.

Fitchicks also dominated our awards night with all of the strength based awards going to a FitChick.

Think back on who motivated you this year. The whole Kiama Fitchicks Club community are very supportive of each other which is one of best things about being in Fitchicks but the person who probably motivated you the most was your training buddy. When you see them this week give them a high five and say thanks. She helped you through the same way you helped her. Its inspiring to see the motivation and support Fitchicks give to each other.

Welcome to the second last Weekly Wrap for 2013. Its been another great week of high intensity training. Every session has a great energy to it. Go hard guys for the last week and a half of training and earn that well deserved break. Read on for all the news…

Welcome to the next edition of the Fitchicks Insider VIP Newsletter.

This week heralds the end of the current Kiama FitChicks Club program. For a lot of our FitChicks this program has been the one where everything has come together. They have done most of the exercises before and their technique is right so all they had to do was load on the weight. Each session the FitChicks assess what they are lifting and decide is it heavy enough? But how do you decide that? You can’t put an individual figure on it as we are all different, with different body structures and different abilities. Basically though we should be lifting to a high intensity that is approximately 85% of your 1RM. (Your one repetition maximum, in other words, the amount of weight you could lift only once).

In a study in the journal “Medicine and Science in Sports and Exercise”, women burned nearly twice as many calories in the two hours after their workout when they lifted 85% of their 1RM for 8 reps than when they did more reps (15) at a lower weight (45% of 1RM). This may not reflect on the scales as muscle is more dense than fat, but clients typically will drop a dress size or two even if they don’t drop a lot of weight on the scales.

So with one last chance to reach those goals, lift heavy girls and you will achieve great things! 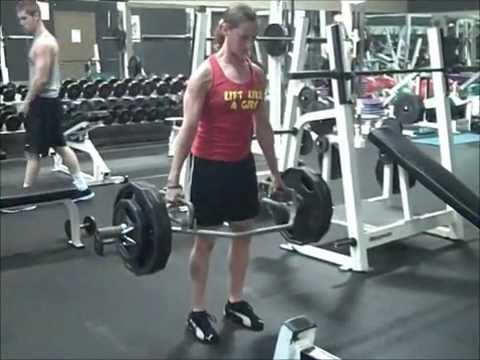 Time for another Weekly Wrap to hit your inbox. We’ve had a great week here with a mix of different success stories so I’ll save the rest of the formalities and get straight to it. Enjoy the rest of your week!

Hope you’re having a great Monday to start your week. Today I have some great case studies to motivate you into better health so take 5 mins out of your day and have a read.

I’ve been taking about Goals a bit lately, in fact I talk about Goals a LOT because frankly as a Personal Trainer in Kiama, that’s all people ever talk to me about. The reason I’m talking about Goals again today is because I’ve had two clients achieve some great success lately. You’d do well to model not necessarily what they’ve done but how they’ve done it.

The first person, we’ll call her Lisa, has made the step up this year to join our Semi Private training group Kiama FitChicks Club.  Just recently she set a goal for herself, the plan being to lose 5kg by week 5 of school term (Clue number 1 – deadline date).

Lisa has stated every week to her fellow  FitChicks Club (Clue 2 – accountability) a small short term goal of losing 1kg per week (Clue 3 –  break it down into smaller chunks). To do this she would work on improving her performance and attain a 90+ nutrition score each week. I think I can be honest and say Lisa’s nutrition had slipped down her priority list over the past few months and although she was still eating fairly well, it wasn’t enough for the changes she was after.

Lisa’s learnt the nuts and bolts of our Kiama Nutrition Coaching Course and she’s already a pretty fit woman but this new found FOCUS has kicked her into overdrive. She already had the knowledge so you could say she’s a bit more advanced than some. They say knowledge is power but that’s bull$hit if you don’t take action.  Well, not only has this past month been above 90 for her Nutrition scores, she’s been going at a perfect 100 four weeks running. Along with that, she’s lifting some big a$$ weights and forcing her metabolism to really shift. The fat burning hormones have kicked into gear

The result: eating clean and lifting heavy has shed 5kg in 5 weeks and her strength & conditioning continues to improve. Well done Lisa!

Case study number two, let’s call him Richard, has a long history of poor nutrition habits. He’s been training regularly and keeping up a consistent exercise regime but one really important thing he’s been doing is meeting up regularly for our FREE Group Consultations every fortnight.

Richard gets together with everyone, repeats to us all his Long Term Goals and we assess his (and everyone else’s) Strengths and Weaknesses since the last Consultation. From that assessment we identify a couple of Short Term Goals to focus on over the next 4-6 weeks that are going to take him closer to his ultimate goals and then finally we determine his NUMBER ONE PRIORITY to improve results next week.

It might seem too simple and that’s kinda the point.

Get some momentum, make it habitual, move on to the next item.

Tick off the next thing on your list, wash, rinse repeat.

It’s called Habit based Coaching and it has a remarkable success rate. Check out these stats:

Try to change ONE Habit and your chances of success are greater than 85%. Try to focus on TWO Habits and your chances plummet to less than 35%. THREE things, forget about it. So basically by focussing on less, you achieve more.

For Richard, those Group Consultations have become very important because he knows the power of accountability. He’s stated those Goals publicly so even on days when he’s not so motivated, the accountability of that group drives him to stay committed.

This morning he tells us all the past few weeks of healthier breakfasts, snacks and food preparation are the best they’ve EVER been in his life.

Think about that for a second.

Is there some sort of Habit you’d like to improve, that you’ve wanted to improve for weeks, months, years even? If you’re sick of running round in circles, speak to your Kiama Personal Trainers  and keep yourself accountable to a group like Oxygen Health & Fitness next Monday 715am. You’ll walk away with a clear plan of what to do and a stack of motivation to do it.

The bottom line is this people, if you want success with your kiama fitness program: